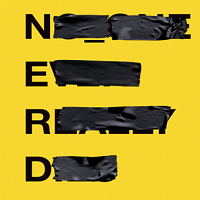 N*E*R*D* stands for 'No-one Ever Really Dies' apparently - well N*E*R*D* itself almost imploded in 2005 after jumping from the Virgin ship. But they rallied, reformed and released the successful "Seeing Seconds" album in 2008 as well as selling out plenty of gigs around the world. Now they have "Nothing". Yes, that's right, "Nothing" - the title of their new album due for release in June 2010. A single, "Hot and Fun", will appear beforehand - you can hear it on their rather colourful website (it's a bit good, actually).

To support this new set of tracks (one featuring Nelly Furtado, curiously), the previous Neptunes are playing just two dates in the UK in June, although I suspect there will be a few more added, looking at the gap between the two. They play the HMV Forum in Kentish Town on 21st June and Manchester's Academy on 23rd June. Tickets are now on sale and cost £30 for London and £25 for Manchester. No doubt the trio will add more nights as the tickets sell through.

The trio will then head off to play a handful of European festival dates.