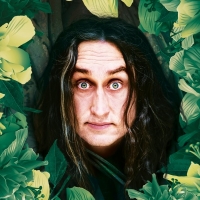 Ross Noble is a man with a lot of hair and a lot more laughs. Now, he has a lot more gigs to play. He must be knackered just thinking about it. Voted 11th in the Channel 4 Top 100 Comedians poll-thingy this year, Noble has admitted his performances are based on audience interaction with himself and "about four words on a piece of scrap paper". Thankfully, he has employed someone to run his schedule for him!

Needless to say, Noble will not be spending the Autumn raking leaves from his drive (partly because he lives in Oz, nowadays) - he'll be starting his tour of the UK with a lovely pair in Manchester on 29th and 30th September before moving on to Birmingham (5th), Edinburgh (7th) and several more, including five biggies in Newcastle (13th - 17th November), a date in Dublin, Blackpool, Liverpool and York until 12th December when he entertains at the Hammersmith Apollo. Cunningly, there are a few gaps in the diary in case venues sell out, which is highly likely given his pedigree.

Tickets for this "Nonsensory Overload" tour are on sale now and cost from £20 to £28 (30.80 for Dublin), depending on location.