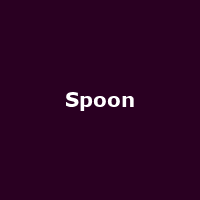 It wasn't so long ago that we were reporting on their last UK tour back in February. Since then, they have released a new album (their seventh) called "Transference" which managed to make number four in the States, no mean feat.

They get to play a whole host of festivals this summer - Coachella, Primavera and Lollapalooza have all been given a bit of Spoon loving as well as a recent US and upcoming Aussie tour. So, it's rather nice of them to pop by on their way home.

Spoon will play three gigs in the UK in November beginning with London's Shepherd's Bush Empire on the 16th and then Leeds' Cockpit on the 17th and Dublin's Academy on the 18th. Tickets are on sale now at Â£16 for Leeds, Â£18.50 for London and â¬25 for Dublin.

Aside from all of this touring, the lads have been doing the American chat-show thing (David Letterman) and producing a video for the single "Written In Reverse" - you can watch it, above (just to whet your appetite).