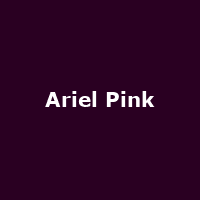 Much-fancied lo-fi psych-folk ensemble Ariel Pink's Haunted Graffiti will touch down in the UK for a quartet of gigs, designed to highlight its founder Ariel Pink's bizarre take on the musical world and a new album, of course.

Having allegedly spent several hours (and metres of cassette tape) recording hundreds of songs since 1996, Pink (christened Ariel Rosenberg), he finally got picked up by Animal Collective's Paw Tracks label who re-released a few early recordings. Despite confusing American audiences with his acquired taste in solo performances, the UK showed some taste when 4AD inked a deal recently and issued a rather lovely single (with Haunted Graffiti) called "Round and Round". A true bedroom-genius (think Magnetic Fields and Babybird - they rattled out oodles of private recordings that fans have never heard either), this is a hot ticket.

He and his musicians will begin a short UK tour on 10th June at Brighton's Freebutt, Bristol's Metropolis on the 11th, Glasgow's Captain's Rest on the 13th and ending up at London's Scala on 15th June. Tickets are no more than Â£12.50 (plus fees) but get clicking soon - 4AD plan to unleash his album (also entitled "Round and Round") later this year to increase the attention still further.