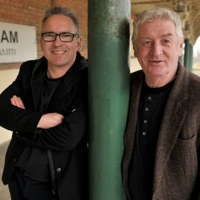 24 Years ago in Galway, The Saw Doctors formed as a trio and played a few local gigs before briefly shrinking to a duo, recruiting with fervour and ultimately turning into a band. They are now a five-piece, but the thing that hasn't changed too dramatically is their music - rousing folk-rock with a modicum of lyrical humour, laced with an attitude from the days of rock n roll and punk. Their biggest hit (in Ireland) was in the early 90s - "I Useta Love Her", which was a number one for nine weeks, earning them support slots with Hothouse Flowers and The Stunning. Their line-up at the moment includes ex-Waterboys sax and bassist Anthony Thistelthwaite (a friendship that stems back to Mike Scott's "Fisherman's Blues" sessions in Spiddal), so quality is assured.

The popular Irish quintet are back in the UK for a winter tour beginning and ending in London at the Shepherd's Bush Empire, save for a previously announced date in Cheltenham on 24th November. The Saw Doctors then leap over to London for the 26th Nov, before heading up to Glasgow (27th), down to Birmingham (1st December) over to Liverpool (3rd), Leeds (4th), Norwich (5th), Bridgwater (9th), Manchester (11th) and Nottingham (14th) before scooting back to London on 18th December.

Tickets are on sale from Friday morning (30th) at 9am, although you can buy the Cheltenham and Bridgwater tickets now (Â£20).