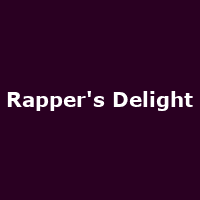 I'm tempted to bring you this article with a rap, but as I'm at about the same level as Morris Minor and the Majors (look 'em up) or Pitman (likewise), I'll stick to simple sentences. After all, it could be argued that The Sugarhill Gang were the first rap act to release an actual hip-hop recording (although many spotters will flag up "King Tim III" by The Fatback Band as being first by a few days). Whatever, "Rapper's Delight" from Wonder Mike, Master Gee and Big Bank Hank aka The Sugarhill Gang has certainly proved to be the most popular. At fifteen minutes long (in its full X-rated version) it is one of the longest and certainly more entertaining than many shorter rap-tracks I could name.

The New Jersey trio have already announced a few UK dates but the demand has been so encouraging they have added a few more nights. The complete tour now starts on 25th May in Manchester and continues to Carlisle (26th May), Liverpool (27th May) then new dates in Winchester (1st June), Bristol (2nd) and Taunton (3rd) before continuing to Nottingham (8th) and finally the Relentless Garage in North London on the 10th.

Tickets are on sale now at around Â£15 plus extras.

Don't go thinking that the Gang are one-hit wonders - they are notorious for other slammers such as "Apache", "Eighth Wonder", "Showdown" (with the Furious Five) and even Bob Sinclar's 2009 single "Lala Song". Ya don't stop!!!