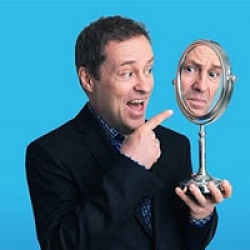 Just when you thought Frankie Boyle and Peter Kay were the only comedians left on the circuit, swallowing all other comedians (stop it now) in their wake and monopolising laughs, several upcoming and not so upcoming stand-up regulars have added dates to their diary (and hopefully yours). For ticket availability, click on the images, below, or scroll down for the full event listing.

You've no doubt heard of Irishman Ardal O'Hanlon, famous for portraying the daftest (or was he?) priest ever in "Father Ted" (he played dim-witted Dougal) and, more recently appearing as George Sunday in the milder comedy-show "My Hero". He does even better stand-up and has three nights confirmed for 21st Oct (Newcastle's Journal Tyne), 27th Oct (St Albans Arena) and 4th Nov (Blackburn's King George's Hall). Tickets are around £21. Honestly, go and see him - heartily recommended.

Chris Addison has very quietly forged a successful path out of satire and political humour over the past 15 years, but it has been his appearance on the hugely successful and poignant TV comedy "The Thick Of It" (and the subsequent film "In The Loop") that has brought him onto chat shows and larger stages. His calendar has just had another date added to his autumn-leg of the UK tour. Nottingham on the 15th November is the newest addition alongside nights in Manchester (7th Nov) and Birmingham (22nd and 26th Nov). £17.50 for most tickets, plus there are a few Bloomsbury gigs looming on 4th / 5th May (pretty much sold out) and 10th July.

Welshman Rhod Gilbert shot to fame (or notoriety) with his stand-up tales (and radio show) about Llanbobl, a fictitious town in North Wales from where he 'came from'. Adding the location to his forthcoming tour in the autumn has thankfully NOT happened yet (it's a bugger to get to), but he has inserted a Southampton night for 29th October into the mix - after appearing at the Edinburgh Fringe, he starts in Bristol on 31st August and continues to St Albans for two gigs on 29th and 30th November. Tickets are around £20.

Carl Donnelly and Stewart Francis may not roll off the tongue or jog the memory too quickly but they may start to with their new UK tour-dates. Donnelly is a dry Londoner whose main body of work has been on radio (as well as live) as part of "28 Acts in 28 Minutes" on Radio 4 and Kerrang! Radio's "The Asylum", as well as guesting on Russell Howard's "Good News" last year. His tour starts on Friday (30th April) and continues with Pete Johansson around the country until he hooks up with the Just The Tonic Club in London on 25th / 26th June. Canadian Francis is deadpan and drier than the Kalahari - his tour also starts on Friday in Manchester and continues onward until 15th May (Parr Hall). He then returns to the UK for a touch of the Bloomsbury's on 2nd / 3rd September and continues to Basingstoke on 30th October. Worth a watch. Prices are all around £20 or less.

Funny ladies appear in the form of Queen of the Fringe Sarah Millican, a familiar face from TV and stage who has been a near-regular on TV's "Mock The Week" (with her familiar Tyneside accent), and Josie Long who has written scripts for "Skins" as well as selling out at the Fringe and appearing on Dave Gorman's show on Radio 4 and the BBC programme "The Bubble". Millican plays the Hen and Chickens tonight (if you can get in) and then begins a summer jaunt from Witney (9th June) via a new date in Weybridge (12th June) to Northamptonshire (29th July). Then she returns for another season (this time, autumn) from Cambridge (6th Oct) to Cardiff (14th). Long has announced a new evening in Inverness for 12th September - tickets are £9.75, what a bargain.

Lastly, try and see the man who created "Fakespeare", Russell Kane. He also starts his tour this week in Bristol and plays varied and scattergun dates right up until some bargain gigs in June and July (a tenner or under for Edinburgh Previews) and a final rush through some October nights in Cambridge, Barnsley and Stockton. Tickets are around £15.