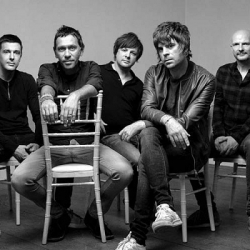 Looks like you can't keep a great indie band down - watch them reconvene, take to the stage and watch them rock and they end up wanting to do it all again. York's finest export since Kit-Kats, Shed Seven played a December tour last year to rapturous audiences seeking great memories from the Brit-pop heyday.

Fancy seeing them again? Of course you do ....

It's no surprise that Rick Witter's lads are playing T In The Park (10th July) or the V Festival (21st / 22nd August), but did you know they have recently been added to Nottingham's splendid Splendour 2010 (24th July)? Oh you did.... OK, how about their recent announcement of playing Shrewsbury College on 1st July then? Not bad, not bad.

Now here are two more biggies - London and Liverpool. That's gotcha. Shed Seven will play a festival warm-up (for T in the Park) at Liverpool's Academy on 8th July and another at Islington's Academy (for V) on 20th August. Tickets go on sale on Friday 30th April at 9am priced around £17.50 and will fly out.

Despite not reaching the heights of Oasis and Blur, Shed Seven crafted plenty of quality pop songs such as "Chasing Rainbows", "Disco Down" and "Getting Better" - for once their greatest hits "Going For Gold" was just that. Enjoy.