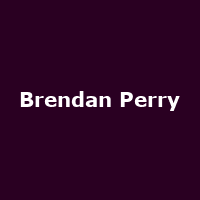 OK, I'm not going to hide the fact that I think Dead Can Dance were one of the most engaging and stunning acts of the 80s and 90s, fusing world music and Gregorian / medieval influences across several landmark albums. With two nape-hair-raising voices in Lisa Gerrard (irritatingly more famous for her work on the film 'Gladiator' than her DCD work) and Brendan Perry, their concerts caused many members of the audiences to openly weep at the majesty of it all.

Both Gerrard and Perry have embarked on solo careers since the dissolution of Dead Can Dance in 1998 (save for a brief reformation in 2005), Gerrard with soundtrack work including the Crowe epic above, "Black Hawk Dawn", "The Insider", "Layer Cake", "Fateless (with Morricone)" and "Balibo", Perry with just one solo work to his name "Eye of the Hunter" (very recommended, by the way). Well, until now that is.

Brendan Perry will appear live for four very limited (and very cheap) appearances in the early summer in order to give his long-awaited new album a promotional nudge. He begins in Ireland at Dublin's Tripod on 26th May (â¬24.50) before crossing over to Oxford's Academy on 7th June (Â£10), Glasgow's Oran Mor on the 8th (Â£10) and Islington's Union Chapel on the 10th (Â£13), although the latter London date is shifting quickly (not surprisingly).

It appears that new album, "Ark", will be released physically on 7th June via Cooking Vinyl and a song from the album ("Utopia") can be downloaded upfront from his website (www.brendan-perry.com).