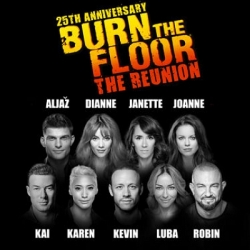 It started off in London, then went to Broadway gathering praise and now it's returning to thrill London again this Summer. No, it's not my (now) chubby mate Karl, it's the fantastic multi-national ballroom dance show Burn the Floor!

The Shaftesbury Theatre will host the bonanza dance show, which originally started as a celbration show for Elton John's 50th Birthday celebrations in 1997 before turning into a worldwide hit. The run previews from 21st July (official opening is July 26th) and runs for a whopping 39 shows before its run ends on 4th September. The show has just finished a successful Broadway stint and is setting up camp in Toronto but when it comes back home it will be spectacular. Special guests Brian Fortuna and Ali Bastian from Strictly Come Dancing will guest star in the shows alongside twenty award-winning dancers from the UK, Germany, Italy and Russia to name a few so it is a international dance feast.

Tickets for the shows are on sale now - you can snap them up by clicking the "Tickets" links below. As you would imagine ticket prices vary depending on which part of the magnificent theatre you want to park yourself but the cheapest available are £22.50.