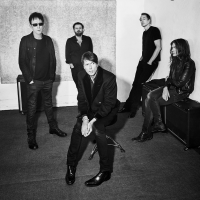 Well, what a busy St George's Day we have here. Not since the legendary knight got accepted for the re-make of "Enter the Dragon" have we been so run off our feet with so many tasty tickets. With the dust settling on the whole eruption shenanigans, we turn our attention to concerts being performed later this year.

We'll come back to the legend of the English patron saint a bit later but first we need to concentrate on another huge legend. Stevie Wonder. He plays MEN in Manchester on 29th June and that means a rush for tickets - but (ahem) don't you worry 'bout a thing - just click, card, pay and cheer in that order. Easy.

Suede fall into the legendary category, if only because it's unlikely they will play that many more dates after their big O2 gig announced this week. It's on 7th December and it'll cost just £30 (and a bit more with fees) to see them thrash out those tear-inducing moments all over again. Ideal for those who missed out on last month's Royal Albert Hall concert.

Current starlets also have some sexy dates to plunder on Friday - Number one star Plan B gets all lippy for nearly a whole month from 6th - 23rd October (£15 - £17.50) with scarcely a moment to breathe.

Tricky pixie, Paloma Faith, is also bringing her spunky show to the nation from 30th October - 8th November (£17.50 - £20). Bigger, brasher and not much taller is Lady GaGa who has a Belfast appointment on 1st November, plus grimey-scamp Wiley is gonna give you 'all that' in Liverpool on the 7th August (£12).

Indie legends next up and James return to the road in December for some Festive fun, bringing their two new mini-albums with them (plus the odd favourite of course). So, 'sit down' and get clicking for around £31.50 - £35.

It's good to have them back and, in a similar ball-park of legendary status but from across the pond, is Barenaked Ladies (rubs thighs at Ed's request). They are back after three years away and raring to play the UK from 9th to 24th September with tickets costing £25 (or 39 for Dublin). Aussie-rockers Jet have sneaked in a whistle-stop slot at the Shepherd's Bush Empire on 18th July for £18.50 and Liverpool's jangle-meisters The Coral play the same venue just four days previously (14th).

Singer-songwriters get represented by 'Babylon'-crooner David Gray and BRIT-winner James Morrison. Gray embarks on a trio of dates in July in Liverpool, Cambridge and Brighton so gotta be worth a punt, while young James has announced a rare gig down in Truro, also in July (the 19th). It's a part of his UK tour and costs £36 - definitely a reason to bop at Morrison's (sorry).

Finally, it's the classic big-guns bringing up the rear - Santana, Supertramp, Toots and the Maytals and a rare UK appearance from country-rock band Little Feat all have concerts inked in for later in the year. They are some serious names right there - come on, Santana, what a guitarist!

We can't leave you without mentioning a few events actually taking place in honour of a certain St George, now can we? The Albert Hall has a St George's Day Prom planned for Sunday 25th, as indeed does the City Hall in Newcastle (actually on the 23rd). There is also a club night happening at Hatfield Uni (also on Friday) and an Oxjam session kicking off in the Axminster Guildhall on Saturday (all for a great cause of course).