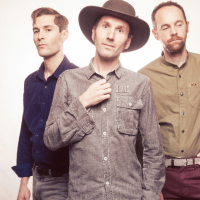 If you've all been paying attention then you will have noticed that this writer is liking a bunch of young upstarts from Oxford called Stornoway. I'm also wondering if there's a band called Oxford from Stornoway.... oh well, I digress (again).

Back to 4AD's new signings and the lads have got a debut album to promote and, what better way to do it than play a gig in your home-town. Tick. How about making that gig intimate, y'know with just the bare bones of acoustic and found-sounds? Tick. Now, times that event by three in a tiny venue? Tick, tick, tick.

Tickets go on sale at 9am on Saturday 1st May, costing just Â£10 + fees (includes support acts for each night). Do NOT underestimate how quickly these will sell!

You may well have heard their bright and breezy jingle-jangle skiffle in the form of single, "I Saw You Blink" (5 stars on this very site) and the buzz on the band seems justified thus far and, as well as this trio of rare appearances, the band also prepare to get well and truly Trucked later in the summer when they return to their home county to play at the Truck Festival on Saturday 24th July (Truck 2010 runs from Friday 23rd - Sunday 25th July).