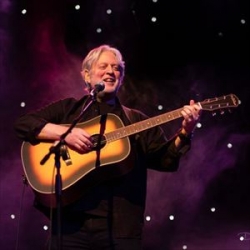 Held in high esteem by Ben Folds Five, Ariel Pink and Barenaked Ladies, Dean Friedman seems to have an army of admirers all over the place. I know of three perfectly sane people who get all winsome when his big numbers 'Lydia' and 'Lucky Stars' get mentioned (I imagine they are doing just that right now at this point).

The easy-going, yet mildly controversial, New Jersey singer-songwriter is back in the UK for a considerably lengthy jaunt starting in Birmingham on 14th July and continuing on for a further twenty one gigs, including a few newly-available ones in Stevenage (18th July), Christchurch (21st July) and so forth until London's Cadogan Hall on 25th September. Seven of the dates take place in Scotland, an admirable programme when you consider most acts only tend to play Glasgow, Edinburgh and Aberdeen, which Dean is indeed doing and then some. Lossiemouth anyone? Yep, he even visits the Moray town on the 17th Sep.

Tickets are on sale now and cost in the region of £15 - £27.50, depending on the location (London being the most expensive).

Friedman has a unique voice and an equally unique take on the world - his 'McDonald's Girl' single was banned by the BBC and got covered by Barenaked Ladies, he scored the hugely-successful TV series 'Boon', got name-checked by indie 6Music warriors Half Man Half Biscuit on 'The Bastard Son of Dean Friedman' and 'stuck it to the man' with the song 'Four More Years' (about Bush's then re-election). Wonder if he'll wheel that song out if Brown gets back in...

Dean has just added a ten date Edinburgh residency at The Lot in August as part of the 2010 Edinburgh Festival Fringe. Tickets are on sale now costing £16 + booking fee.