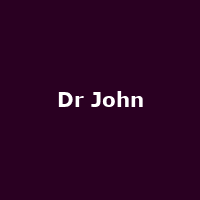 Want to see a man who plays that hoodoo and voodoo so well? You do? Better get clicking for some Dr John tickets then. Yes, the great blues and funk entertainer is back in the UK for a lovely pair of dates in July. He plays the Queen's Hall in Edinburgh on the 1st and London's Shepherd Music Empire on the 4th. Tickets cost Â£25 - Â£27.50 plus fees and are on sale now. [Dr John is also playing Sunday 27th June at Glastonbury, and Saturday 3rd July at the Cornbury Festival in Oxfordshire - Ed]

So, you know the name but can't place the tunes? His entire career has been a bit of a landmark and to call him just a blues-man is an understatement - he's just about done it all, although his peak period includes the early 70s when he hooked up with funkmeisters The Meters to record the album "In The Right Place", a melange of New Orleans funk, swamp blues and organ-driven hoedown. As well as the preceding "Gumbo" set and the following "Desitively Bonnaroo" (also recorded with the Meters), the man christened Malcolm Rebannek gained a reputation for his boogie-woogie workouts on stage, both behind the piano and wielding a guitar. He was also in demand as a sessioneer, appearing on Van Morrison, Rickie Lee Jones and Harry Connick during the 70s and 80s. The man's still got it of course - his "Creole Moon" album in 2001 was a belter.

Classics like "Such A Night", "Right Place, Wrong Time", "I Been Hoodooed" and "I Walk On Gilded Splinters" are bound to get an airing at these concerts, supported by crack blues ensemble The Lower 911 who also aided and abetted on the "City That Care Forgot" album released in 2008 to support the New Orleans disaster and clear-up fund.