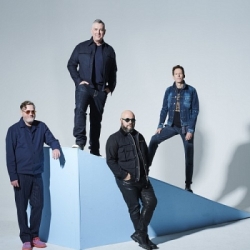 Barenaked Ladies all over the UK this September? Let's just savour that image for a second before I inform you it is actually the return of the Canadian rockers to England for a nine stop tour spread over twelve nights. The award winning rockers have been going strong since 1988 and have achieved worldwide success with singles such as 'One Week' and 'Pinch Me' and they will be showcasing their wide catalogue of music in none venues starting with the Colston Hall in Bristol on September 9th before they travel to Birmingham, Southampton, Brighton, London, Leeds, Manchester, Cambridge, Newcastle and finally Dublin's Olympia Theatre on 26th September.

The Ladies (or Barenakeds) are an immensely popular band and they never fail to deliver on the live front. Tickets for all the shows (£25 for the UK, 39.20 for Dublin) go on sale Friday 23rd April at 9am, so set the alarms and hover over the links below to avoid disappointment. As if anything can be more disappointing than the lack of any literal meaning in the bands title.