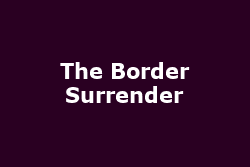 North London quartet The Border Surrender have just released their debut EP 'Blood in the Snow' on 19th April 2010 available on 7" vinyl and digital format, via Smoky Carrot Records.

The Border Surrender are a uniquely British romp through the Americana influenced vocally led and utterly compelling alternative folk genre.

The band manage to channel their vocal harmonies and rich instrumentations into atmospheric recordings more evocative of a dusty Texas highway than the North London basement studio in which the songs were recorded.

Inspiration is drawn from the likes of Buffalo Springfield, My Morning Jacket, Band of Horses, Springsteen and Fleet Foxes. The influence list reads strong on American authority, but The Border Surrender are a wholly British talent and this can be felt all through these self produced, home recorded tracks.

Having spent 2009 fine tuning their art, they are ready to start wowing audiences with their mesmerisingly intense and aurally dense live shows in 2010.