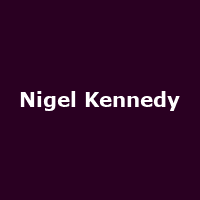 It's hard to believe that Nigel Kennedy turned 53 in December - he still looks like a young spikey little punk who looks like he'd pull your strings rather than play them. But his boundless enthusiasm for his art continues and more power to him and his planned trio of grandiose evenings planned for November.

Now here is a pub trivia quiz for you - which classical piece is Nigel Kennedy most commonly associated with since his early years? Correct - Vivaldi's stirring 'Four Seasons', a work he is now resurrecting for these three special evenings. The original 1989 recording with the ECO in 1989 has sold over 2 million copies to date and remains a landmark interpretation for its vigorous passion and precision. Kennedy has since gone on to perform and record Beethoven, Bruch, Hendrix, Polish and Klezmer music, as well as guesting on numerous artist's albums including Kate Bush, Stephen Duffy and Sarah Brightman. Don't miss him this time.