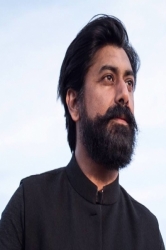 The social and arts enterprise, The Human Culture Collective, aims to increase awareness of world poverty issues by holding music and performance events and parties. Their next ambitious event takes place at Cargo in Shoreditch, East London and features a cracking quartet of performers as well as food and drink from around the world.

Tabla-maestro Talvin Singh will headline the Artists Revolution Party - Arts in Action on World Poverty on 26th June, starting at 7pm. Tickets cost Â£11, a bargain for such a cool cause.

Singh has been a pivotal figure in Asian-fusion music since the 90s, creating a hybrid of Indian-classical music and tight atmospheric drum n bass. The latter prompted him to begin the famous 'Anokha' club night at the now-defunct Blue Note bar (Hoxton) - but, trust me, his tabla-playing is the mutt's nuts.

In support is Carmen Souza, a Portugese/Cape Verde singer who mixes jazz, afro-beat and salsa/fado in a rather fetching and colourful fusion that is sure to be the perfect accompaniment to a fruity cocktail and the summer sun. Also appearing is the Attab Hattad Ensemble (London-based acoustic-oud wizard) and Julene (Haitian singer).