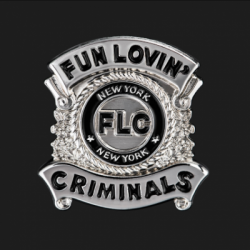 It seems now that Huey Morgan and his Fun Lovin' Criminals have found their creative touch again they don't want to put their foot on the brakes. They have barely had time to sit down and have a snack (possibly a Scooby based one- who knows?) after wrapping up their rocking March tour but they have announced yet another gig-fest around the UK for September.

The group are enjoying a critical/ popular renaissance since the release of their latest album 'Classic Fantastic' and it is set to continue as they start their September tour in The Palace, Aldershot on 2nd September. They play in fourteen more venues over the following sixteen days, including The Plug in Sheffield (3rd Sep), the City Hall, Salisbury (7th Sep) and the Shepherd's Bush Empire (17th Sep) before finishing it up in Wolverhampton's Wulfrun Hall on 18th Sep.

Before all of that, the band will release their latest single from 'Classic Fantastic' - 'Mister Sun' out on 26th April, then next month, Huey and the boys are over to play in the annual Greenwich Beer and Jazz festival on 28th May along with Hayseed Dixie. Fun Lovin' Criminals and Hayseed Dixie in the same place at the same time? That's sure to be a blast!

In two weeks time, the band release their latest With Huey Morgan and his group finding new inspiration and enjoying themselves more than ever on stage it is set to be a set of special gigs. To be a part of the fun click the links below, tickets range from £19.25 to £25.25 including booking fees.