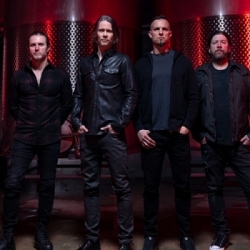 What a swollen sack of 'live' jewels we have for you this week, ticket-wise that is. Some real gems are on offer so let's get cracking:

If a good old dose precious Metal is what you savour then Alter Bridge, alias US melodic-rockers Creed minus Scott Stapp, appear in the UK in October around the time of their third album (excitingly-called 'Alter Bridge III'). They play eight dates from 16th to 26th October, from Glasgow to Bristol (including a London date in Hammersmith) and tickets cost £17.50 - £19.50.

No that's not an diva-like demand from Lady GaGa - are a crunchy metalcore band from Sheffield who are in the throes of finishing off album number three. Their 2008 'Suicide Season' album and its sister remix set 'Suicide Season - Cut Up! (remixes by Slipknot, Dillinger Escape Plan and Utah Saints persons) were well-received to the point that they are due a bigger exposure in 2010. Their tour runs from 21st September (Oxford) to 1st October (London) and tickets are £13-£14. Cancer Bats and Tek-One (who mixed a track on 'Cut-Up') are supporting. Ooh yes - don't forget about Sabaton on tour as well in October, in Manchester, London, Sheffield and Brighton. Finland's finest for £14.

Two bands with two ulterior motives have announced a few dates as well. Keane (as reported this week) want to say 'hello' to their fans and Supergrass (as also reported this week) want to say 'goodbye' to them. Mixed emotions for sure and Keane are hitting the 'clubs' in June, and by 'clubs' we mean smaller venues that don't happen to be ruddy great forests. London, Birmingham, Glasgow and Dublin play host to the Sussex trio for around £32.50 max. Sadly, Supergrass are hanging up their drumsticks and picks for good soon after their June dates in Glasgow, Manchester and Brixton. £25 for the asking price - alright?

Legends from the 70s next and Blondie have a few UK June dates added to their forest gig in Gloucester and Kenwood House stint in London (tickets still available). Manchester (16th), Sheffield (17th), Bournemouth (19th) and Southend (29th) are the extra spots for a bit of Debbie Harry 'rapture'. Picture this, fans - £35 for a night of classics plus new songs from 'Panic Of Girls', due out in June as well.

Legends, I hear you holler, LEGENDS!?! Jean-Michel Jarre do ya? The French synth-stroking and laser-harp coaxing composer who brought us ambient-rock before the term was coined (minus the rock bit) by the music press in the early 90s, is back. Two more dates have been added to his October UK short-haul - the tour now reads: Glasgow (3rd) and Cardiff (6th) on sale Friday, along with the already-being-snapped-up trio of Birmingham (8th), Manchester (9th) and the O2 (10th). £43.50 - £45.

Finally, are you having a laugh? You should be - Ricky Gervais has added some September dates to his world domination program and the lucky venue is London's Hammersmith Apollo from 6th to 11th. These will fly out (presumably not affected by volcanic ash) so be quick.

At the same venue, magical illusionists from Stateside, Penn and Teller, return to the UK in July from 14th to 18th. These guys are the masters - you really have to see them and probably the best illusionists since the government! Alun Cochrane also has fresh tickets up for grabs from Friday 14th April.