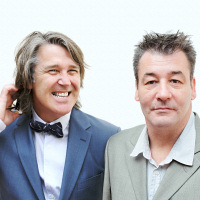 Liverpool's electronic-pop pairing of Gary Daly and Eddie Lundon, otherwise known as China Crisis, are back on the road for some exclusive O2 Academy dates during August, as well as a couple of special smaller venue gigs during the year.

The band (basically Gary, Eddie and a few crack musicians) begin their travels on 2nd August in Oxford then on to Sheffield (6th), Newcastle (7th), Birmingham (8th) and finally London Islington (11th) - tickets go on sale at 9am Thursday 15th April, priced at £15 for London or £12.50.

The boys are also playing a rare date on the Isle Of Man on 17th June (£12) as well as a couple of evenings at the legendary Cavern Club in Liverpool on 10th and 11th December, which are both available now for £16.50.

If you are still scratching your head trying to remember what China Crisis achieved, they actually date back to the beginning of the 80s when their slight and pretty ambient MOR won over John Peel. Their first two albums, as well as sporting ridiculously long titles (we'll call them 'Difficult Shapes' and 'Fire And Steel'), spawned 'Christian', 'African and White', 'Wishful Thinking' and 'Tragedy and Mystery'. But it was the Steely Dan-man Walter Becker who brought them the coffers with 'Black Man Ray' and 'King in a Catholic Style'. Should be a good night.