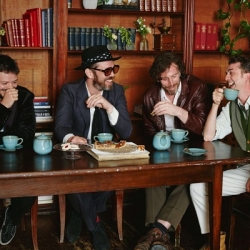 Cheeky munchkins, Supergrass. They burst onto the music-scene back in the mid 90s and were Brit-pop before Brit-pop became a dirty word and wrote a respectable smattering of jolly tunes, including the bonkers summer-anthem 'Alright'. Sadly, the lads have decided to call it a day after seventeen years together, but not before playing a trio of farewell dates first.

All three gigs are in June starting in Glasgow (8th) then Manchester (9th) and finally, the Brixton Academy (10th). These will be emotive performances which will no doubt see the band cover their entire career, maybe even a few Diamond Hoo Ha tunes. Tickets cost from £22.50 to £25 and go on sale at 9am, Friday 16th April.

It goes without saying - the trio are blisteringly good live but it's their wealth of releases they'll be remembered for. From the impish 'Caught by the Fuzz' (not a song about a sadistic trouser zip) through to their more plaintive 'Road to Rouen' period, Supergrass quietly (but noisily) went about their business with a certain aloofness with the music press, as time went by. The hits never seemed to dry out - 'Richard 3' and 'Sun Hits The Sky' (complete with the sci-fi theremin sounds), 'Moving' and 'Pumping On Your Stereo' - you know them all. After the final gigs, the band are set to explore new musical horizons [Gaz and Danny started band 'The Hot Rats' last year - Ed] - perhaps they weren't 'in it for the money' after all.