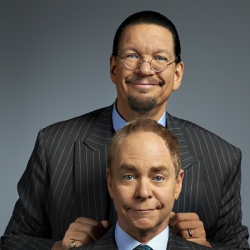 Whose Line Is It Anyway?, LA Law, The Tube and Penn & Teller. If you had to define a time in history using only what was on the then-glorious Channel 4 at the time, and that time was the mid- to late-eighties, then these TV shows are unmistakable cultural landmarks.

Twenty or more years later and Paul Merton, Clive Anderson, Jimmy Smits, Jools Holland and their contemporaries are still making a living from the flickering box in the corner of your living room, but what of Penn & Teller?

It was a golden age of television magic back then. Paul Daniels had more than one successful primetime magic show (no, really) and, stateside, David Copperfield was making the Statue of Liberty disappear in New York whilst simultaneously making supermodel du jour Claudia Schiffer appear in his bed (the two were engaged for six years).

Then, in the UK and into the nineties, not much was heard of the double-act. In the US, however, they embarked on a phenomenally successful Las Vegas residency that dwarfed the achievements of tiger-bait double-act competitors Siegfried & Roy, along with many other stalwarts. Rarely off the television in America, their Showtime! Channel programme 'Bullshit!' has won numerous Emmy awards and it is on the back of this sustained success that P&T are returning to the UK for the first time in 16 years with five summer dates.

From Wednesday 14th July to Sunday 18th July, Penn & Teller will be at the HMV Hammersmith Apollo in London and tickets - on sale on Friday 16th April at 9AM (from £29.50) - are sure to be in high demand, so get yours before they mysteriously disappear (finally, a magic joke).