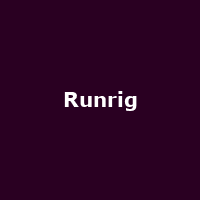 A band whose 'live' reputation earned them a major-label deal in the late 80s, culminating in Chrysalis choosing a 'live' document for their debut for the label, says an awful lot for the PR persons employed at the imprint at that time. It also says a lot about the band itself and Runrig have, as they say, never looked back since the heady days of 'Once In A Lifetime - Live' was offered to the public. A stirring and rousing set of Scottish pride and an anthemic, folk-rock call-to-arms, OIAL-L failed to make much impression south of the border (although I'd like a pound for every copy I shipped over the Our Price counter!) - but it was a start. The follow-up studio album 'Searchlight' reached number 11, the next two the top 5 - 'nuff said.

After a further 20-odd years of selling-out arenas and small clubs alike, Runrig are back with a UK tour in December 2010 and it's time to think about buying your tickets now, before they sell out (I kid you not).

Fittingly, they begin the nine-date jaunt in Dumfries on 8th December and continue to Nottingham (9th), Southampton (10th), Coventry (11th), Sheffield (14th), Gateshead (15th) and Preston (16th), before heading back to their home-land and Dunfermline (17th) and Glasgow's Barrowlands (18th), the venue where that classic live album was recorded in 1987 and where most Runrig tours end. All tickets are now on sale - mainly around Â£25.

If anyone witnessed the Scone Palace gig in 2009, especially after seeing guitarist Malcolm Jones returning briefly to the stage after a heart op (he's on the mend again folks), it was apparently 'incredible'.