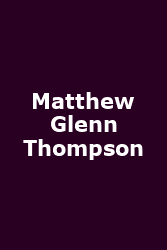 'Cruising and thoughtful' US songwriter Matthew Glenn Thompson releases his new single 'Ordinary Girl', a deep and passionate melodic pop-rock track, and the follow up to his recent UK debut single 'I Get Lost'.

The single is also supported by a video release which was shot in the USA.

Both tracks were taken from his recently released album 'The Garden and The Arcade', an album crammed full of meaning and thoughtful melodies and was produced by Casey Diiorio (Bowling For Soup, The Crash That Took Me, David Garza) at Valve Studios in Dallas. The album featured Matthew on vocals, piano and guitar, Michael Jerome Moore on drums (Richard Thompson, Better Than Ezra) & Paul Jenkins (The Campaign) on bass.

Matthew Glenn Thompson promises to be one of the must see artists of 2010 when he tours the UK this summer.