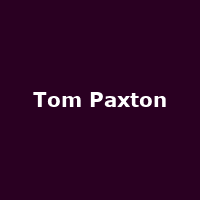 The word 'folk' is no longer a dirty word amongst music-fans and most pub-goers have surely witnessed a singer-songwriter, complete with an acoustic-guitar and a faint nod to Dylan and Seeger in delivery. You can bet your spare change that a lot of these strum-drum troubadours have a secret penchant for a man who pretty-much made it acceptable to compose a song and then pick up a guitar and play it to an audience - Tom Paxton. It's just a shame a lot of them forget to bring his simplicity and melody to the gig, opting for endless cover versions instead. Ah well, you now have a chance to see the man in action - Paxton's coming to town in November.

His UK tour starts in St Albans on the 6th and continues around the South of England until hopping North of the border to Glasgow on the 20th. Tickets cost around £23 and have just gone on sale.

The man has been recording and performing for nigh-on 60 years and has been covered by hundreds of other artists such as Willie Nelson, Dolly Parton and Joan Baez. Parton had a crack at one of his well-known tunes 'The Last Thing On My Mind' with Porter Wagoner in 1967 and scored a number one (in the States), although Gram Parsons, Chet Atkins and The Dubliners have also stamped their mark on it. 'Ramblin' Boy' and 'What Did You Learn In School Today?' are also signature tunes but Paxton is also revered for his protest and civil-rights songs from across the decades, many firing barbs at US politicians and government officials.

I wonder if he fancies running for PM over here?