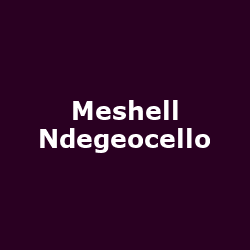 With a career spanning over two decades and nine solo albums (the latest, 'Devil's Halo', released last October) under her belt, Meshell Ndegeocello [spelt correctly, fact fans - she dropped the apostrophe and accent a while back - Ed], has slowly but surely climbed her way to the small circle of neo-Soul supremes. A former protégée of Madonna (she released five of her records through Madonna's label, Maverick ), Meshell's skills both as a vocalist and bass player have been sought after by many of her peers from Madonna herself, to Basement Jaxx, Alanis Morrissette or even The Rolling Stones. Though her biggest hit to date is a cover rendition of Van Morrison's 'Wild Night', released in 1994 as a duet with John Mellencamp, she will give you the opportunity to measure the true extent of her talent, as she is set to play three consecutive shows at the Jazz Café in Camden on 13th, 14th and 15th June.

Her most recent album (October 2009) 'The Devil's Halo', was partly self-produced, and boasts the contribution of the equally-mighty Lisa Germano (Giant Sand, OP8) on violin and cello.