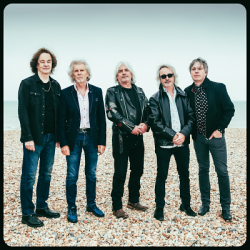 Incredibly enough, English rock-band were formed just over 50 years ago by Rod Argent, Colin Blunstone and latterly Chris White. It took five years to ink a deal with Decca Records, who released the infamous hit 'She's Not There', but even more time to be recognized in their own country. Numerous follow-up singles appeared until the band experienced their second huge hit (but not in the UK), 'Time Of The Season' in 1968 - unfortunately they had split up by then, disillusioned at the lack of success.

Finally, decades later, most of their catalogue has been recognized as decent high-brow guitar-pop, especially the closing 1967 album 'Odessey and Oracle' (mis-spelt by the printers, nice one). They didn't LOOK like The Beatles and didn't sound like them, but they have always had tunes.

Judge for yourselves as the lads hit the road again in May with dates in Poole (12th), St Helens (29th), Edinburgh (30th) and Manchester (31st) as well as an appearance at the Weyfest 2010 Festival in Tilford nr Guildford on 5th September.

Tickets for the headline tour cost around £15.50. Go on, give them a listen - I saw Rod Argent a couple of years back play a cracking set at IndigO2 and was surprised at how damn good it all was.