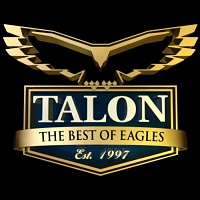 Talon - The Best Of The Eagles

Composer of 'Peaceful Easy Feeling' and 'Already Gone' will be a very special guest to UK Eagles tribute band 'Talon' on their forthcoming Spring tour for three exclusive dates.

Jack Tempchin, a pioneering co-architect of the Southern California Sound, a classic country-rock movement popularized in the 1970s by The Eagles, will play his hits live for three nights in the United Kingdom on April 28th, 29th and 30th, 2010.

Jack Tempchin wrote and co-wrote the legendary hits 'Peaceful Easy Feeling', 'Already Gone'(both on the best selling album of the 20th Century), plus two songs on The Eagles' latest 'Long Road Out Of Eden' titled, 'Somebody' and 'It's Your World Now'.

He also co-wrote 'You Belong To The City', 'Smuggler's Blues', 'I Found Somebody', 'The One You Love', and 'Sexy Girl' with Glenn Frey, and the Top 10 hit 'Slow Dancing' for Johnny Rivers. He's worked with many big acts like Tom Waits, J.D. Souther, Beth Nielsen Chapman, and Mickey Joe Harte. His songs have been recorded by George Jones, Emmylou Harris, Glen Campbell, Patty Loveless, Tanya Tucker, Trisha Yearwood, Chris Hillman, Richie Havens, Randy Meisner and NRPS, and sampled by JAY Z. His music has been featured in movies The Big Lebowski and Thelma & Louise.

Tempchin's next new solo effort titled, 'Singing In the Street': Jack Tempchin Live At Tales From The Tavern, is a live recording slated for a summer release. This new CD/DVD will feature several of his multi-platinum hits performed primarily acoustic, interview segments, amusing anecdotes, and fascinating stories about his experiences with the rock stars behind the legendary songs. This April, attendees of three UK concerts will delight in an evening of the same.