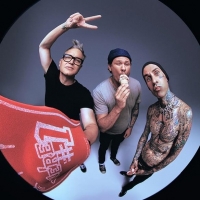 In 1994, when a certain spiky punky trio from San Diego spat out an eager little moon-at-the-adults album called 'Cheshire Cat', many doubted their longevity - me included to be honest. But, despite splitting up in 2005 and reforming in 2009, they still have legions of adoring fans who haven't grown old enough to forget about them and adding new younger fans who are tired of the wet-wipes currently preening themselves on MTV.

Blink 182 are about to put their collective pants and jackets (to quote an album title) and return to the UK for a clutch of gigs during the summer. You already know about their appearances at Reading and Leeds but they are also playing three more tasty gigs in Scotland and Ireland, for those that can't travel the distances to England.

Tickets go on sale on Friday 9th at 9am for their August jollies in Aberdeen (16th - AECC) and Glasgow (17th - SECC). The cost is Â£32.50 and the demand will be phenomenal, so be poised with that clicking finger right here on Friday morning. The other gig is at Dublin's Point on 31st Aug and tickets are on sale now for â¬44.20.

Although there is no new material on the horizon, you can expect a welter of classics from 'Dude Ranch', 'Enema of the State' and eponymous 2003 set.