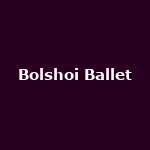 If you are going to see the very best and most famous performing arts company on stage this year, then you really ought to consider the forthcoming summer season featuring the Bolshoi Theatre Company, coming soon to London's Royal Opera House. Formed in the late 18th century in Moscow, the Bolshoi Ballet and Opera have delighted audiences across the globe with an ever-evolving sequence of different productions. The infamous Bolshoi theatre building in Moscow is currently under-going a Â£500-billion restoration project, no small change but an indication of how seriously Russia takes its cultural heritage.

Now, for the summer, the Bolshoi returns to London for a special series of performances at the Covent Garden's Royal Opera House, a true treat for classical music diehards and newcomers alike. Tickets start at around Â£49 and went on sale today (6th April).

If it's Bolshoi Opera you want then the same venue is hosting a quartet of performances of Tchaikovsky's lyrical-opera 'Eugene Onegin' from 11th to 14th August. Tickets start at Â£59.50, rising to Â£148.50 for orchestra stall-seats.