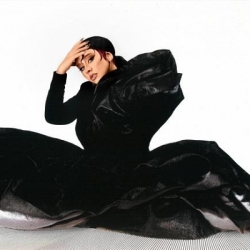 Christina has spent much of the past year in the studio working on her 4th studio album. The first single from 'Bionic', which is the fiercely energetic anthem 'Not Myself Tonight' produced by Polow Da Don, will be available for download via iTunes from 13th April.

'Bionic' features songs co-written by Christina Aguilera along with her much buzzed about collaborations including Sia, Tricky Stewart, Polow Da Don, Le Tigre, Hill & Switch, and Ladytron among others.

Christina says: "Working on this album with so many talented artists and producers that I admire was really an amazing experience. The artists I chose to work with added so many unique song layers to 'Bionic'. My intention was to step into their world and what they do combined with my own vision and sound. The results were magic."