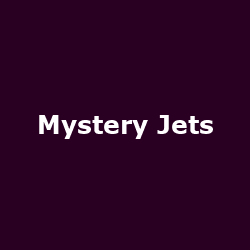 What's the link between a Chevrolet Spark and indie rockers, Mystery Jets? Nothing less than an a free event, which will see the band exclusively perform their much-anticipated third album, due out in June, to a selected audience of 250.

The private gig will take place on Thursday 8th April at Vinyl Factory, located underneath the independent record label, Phonica Records in Soho, and is sponsored by the American car maker.

After being given the privilege of a premiere hearing of Mystery Jets' upcoming opus, the audience will be asked to draw the itinerary of the band's unscheduled tour by voting for five cities they'd like the band to stop by. The cities short-listed include Birmingham, Manchester, Liverpool, Newcastle, Brighton, Edinburgh and Bristol. A pop-up gig, with venues ranging from a drained swimming pool and multi-story car park to an old picture house and ferry across the Mersey, will take place every two weeks throughout April to June, until the album's release.

The Mystery Jets' live London showcase will be followed by DJ sets from Jack Penate, and Nick Grimshaw, among others; as well as a graffitti session of the Chevrolet Spark ,among other attractions.

The 'Chevrolet Spark Unscheduled Tour' is a free invite-only event - visit www.sparkunscheduled.co.uk for more information on how to bring the tour to your area and win an exclusive ticket.

Aside from this, Mystery Jets will make a few appearances, notably DJ sets at Scala, London and The Blue Rooms in Hereford, respectively on 10th April and 7th May, a show at The Academy in Dublin on 17th April, as well as take part in the Dot to Dot Festival 2010 (29-31 May), the Somerset House summer series (8th July) and the Lovebox 2010 Festival (16th July).