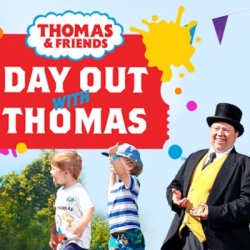 He's not showing his age y'know - Thomas I mean. He's been pulling coaches, wagons and mail-vans for over 60 years now, even surviving Dr Beeching's ill-informed tinkering with the railways ten years into his career. I say 'he' rather than 'it' of course - the Rev W.V.Awdry's charming blue locomotive with the cheeky smile clearly has more character and charisma than the average railway-staff which children and adults have picked up on, generation to generation. Thomas is now preparing to rattle down a restored track near you AND appear in his own show in October and also early 2011.

The 'Days Out With Thomas and Friends' events are a chance for the whole family to meet the famous train, along with his friends and The Fat Controller, and take a trip behind his steaming blue loco with loads of other activities and prizes to be won on the day. The full list of participating railways is listed below, but worth a mention are the famous Watercress Line, Hampshire (2nd - 11th April and 7th - 15th August), the Leicestershire Battlefield Line (24th April to 3rd May) and the South Devon Railway (1st - 3rd May). Our links take you to the choice of family tickets (around £40) or individual child (around £10) and adult (around £15) so take full advantage of that heat-wave we are due over the spring and summer (ha ha).

As well as chugging around the countryside, Thomas is also starring in his very own show at selected theatres around the UK. It's a family bonanza of songs and stories adapted from the famous Awdry books, featuring his chums Percy, Henry etc plus the infamous Fat Controller (or the head of the RMT, if you like) with an underlying story involving a circus coming to town.

Brighton will showcase the production on the 23rd and 24th Oct before further dates take place in 2011 in Liverpool (4th and 5th Feb), Manchester (21st to 23rd Feb), Edinburgh (25th to 27th Feb), Bristol (12th and 13th Mar) and finally Oxford (19th and 20th Mar). Tickets cost around £20.50 for most performances - make sure you check the location of your seats carefully as some venues have very high-up galleries that some little ones might find scary!