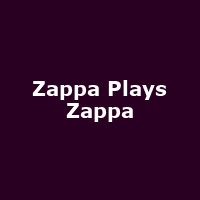 The Zappas in question are the late (great) Frank and his eldest son, 40-year-old Ian Donald Calvin Euclid Zappa, aka Dweezil.

According to 'sources', Zappa Junior's wife, Lauren Knudsen, has this week filed for divorce citing 'irreconcilable differences' and seeking physical custody of the couple's daughters. Not to be outdone by his parents and perhaps still harbouring a grudge at the ridiculous name he was given (Ian), Zappa and Knudsen called their two girls Ceylon Indira and, in an obvious homage to Chelsea FC, Zola Frank. No, really. Zola Zappa. Anyone for Scrabble?

All of which means that the former MTV VJ will almost definitely honour the new tour dates as he will probably be needing to pay his ex-wife alimony equating to 150 per cent of his income. It's only fair.

Whether, Ian/Dweezil is keeping Frank Zappa's music and memory alive with Zappa Plays Zappa or shamelessly cashing in on his father's towering musical influence is anyone's call. To be fair to the soon-to-be-single Ian/Dweezil, he does call 'ZPZ' a tribute band and appears to share a profound love of his father's music that is familiar to dedicated Zappaphiles everywhere.

The six-date tour opens in Cambridge on 21 July, closing at Gateshead's impressive Sage just seven nights later. In the interim, Zappa Plays Zappa face an enormous test of popularity when they play Liverpool's Echo Arena (as part of Summer Pops 2010), which has a standing capacity of 11,000.