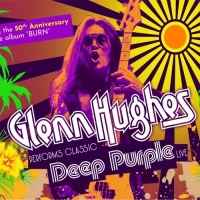 If you know your Deep Purple from your Black Sabbath and your Whitesnake from your Motley Crue, there's a darned good chance you might have spotted the name Glenn Hughes in the performing and writing credits on albums by all of the above at some point. Hughes made his mark on the third generation of the Purple role-call in the early 70s on albums such as 'Burn' and 'Stormbringer', adding a funky flavour to the usually rocky surroundings.

As well as dabbling with bands, he also collaborated with individual musicians to create a considerable legacy (of pretty mixed results on occasion it has to be said - remember the KLF 'America: What Time Is Love' single? Monster tune! How about the Asia sessions in the 90s? Hmmmm!). The initially-ignored project with Pat Thrall has proven to be the most-revered out of all of his solo and near-solo work (it had a belated reissue in 2007, 25 years after its original pressing). Rumour has it he's recording with a new band co-formed with Jason Bonham (that does sound a bit tasty).

Hughes is back on tour in September and kickstarts a short jaunt around these shores with a date in Manchester on the 23rd, Holmfirth (24th), Glasgow (25th), Wolverhampton (28th) and finally Nottingham (29th). Tickets are available from 9am tomorrow (Wed 31st) priced at Â£20.

In addition to these gigs, he is also appearing at the Rock and Blues Custom Bike Show in Ripley (Derby) on 31st July alongside Jason and the Scorchers and the UK Subs, not forgetting a massive array of gleaming, roaring custom bikes giving it the full revs. The Coney Grey Showground day out costs Â£40 with more acts to come. Just you wait for the bit where Hughes does his 'note-holding' party-piece...