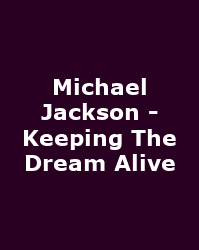 June 25th of this year will see the first anniversary of pop legend Michael Jackson's untimely death. No matter what people thought of his personal life, his music, especially when working with producer Quincy Jones set a standard that has rarely been bettered and he also gave much of his time to various charities.

So what better way to commemorate his life and achievements than by going to a tribute show, for which all proceeds will go to charity. The show, titled 'Keeping the Dream Alive' takes place at The Troxy in London on Friday 25th June. The Event features Michael Jackson's official impersonator Christopher Gaspar as well as Jackson's Nation, a tribute musical project who made 'Guiding Star', a self made tribute song/ video. With more guests to be announced it is set to be a great night, especially as all proceeds are going to both The Great Ormond Street Hospital, which Michael Jackson both supported financially and visited on numerous occasions and the Wylie Draper Foundation, (Wylie Draper was the actor from 'The Jacksons: An American Dream').

Tickets cost Â£50 for a great night of entertainment and charitable fun. Doors open at 7.30pm. It's further proof that the singing icon will remain around for a long, long time through his fans.