Are you Tempted by Squeeze's Winter 2010 UK 'Spot the Difference' Tour? 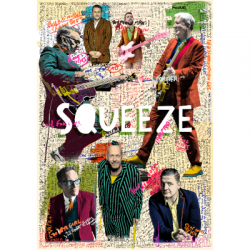 One of my favourite London bands of all time are Squeeze, who came to prominence in the late 70s with top tunes like 'Cool For Cats' and the peerless 'Up the Junction.' They also had a certain Julie Holland on keys back then. What? Oh right, Jools Holland. So it is with great excitement that I can tell you that founder members Glen Tilbrook and Chris Difford [unfortunately, Julie couldn't make it - she's washing her hair - Ed] have announced a new album that is due to be released this year. Great, bye then.

Haha, got ya, of course there's more. To add fuel to the aforementioned news the South East London greats have announced a sprawling twenty one date tour spread over November and December. The Tour, entitled the 'Spot the Difference Tour' starts in Bournemouth's beautiful Opera House (now 'The O2 Academy') on November 14th before going to Reading, Bristol, Cardiff and Nottingham among other top venues in November. The December shows kick off at the Cambridge Corn Exchange on December 2nd before hopping to Norwich, Plymouth, Southampton and Brighton before ending the tour with three consecutive nights in their hometown, with a gig in the South East (IndigO2), North (Forum) and West (Shepherds Bush Empire) on 9th, 10th and 11th respectively.

A further incentive has been added in the shape of support act The Lightning Seeds, who will serenade you with songs about the Life of Riley, and (if England should just happen to have a bit of success in the World Cup... ahem), may even bring out the Three Lions for ya.

Not to be insulting, but you would actually be a bit of a fool to miss it. Tickets go on sale Friday 26th March at 9AM, priced at £32.50 regionally, £35 for the London shows.