Megson Wins Award, Earns Respect from Fans and in Line for Promotion in March 2010 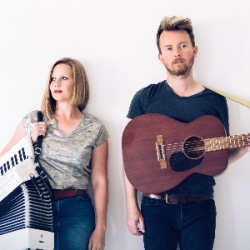 If you follow football, a wry smile will appear on your face while reading that head-line (and possibly an amount of disbelief). If you happen to follow the nu-folk scene, you will be nodding sagely because you know I'm rambling about the Teeside folk-partnership of Stuart and Debbie Hanna a.k.a. Megson.

Having just notched up another award for Best Folk duo and to celebrate the recent release of their rather polished 3rd album, 'Take Yourself A Wife', the acoustic pair are back on the road for pretty much the whole year up until December.

They play the Acoustic Routes festival in Barnsley tomorrow (20th) and then two more nights in Barton (Lincs) on the 26th and Rugby on the 27th. A month off is then followed with the first cluster of Spring dates beginning in Kings Heath (Birmingham) on 27th April and then Nottingham (28th), Bedford (29th), East Grinstead (30th), Bellingham Acoustic festival (2nd May), Dartford (4th), London's Parkway Green Note (6th), Cambridge (14th), Colchester (15th), Blackburn (16th) and finally (for the Spring) the Folk and Food Festival in Hartingdon on the 30th May - that's in Derbyshire by the way! Tickets are on sale now approx £10 or less!

If you haven't heard them before then go to their My Space page (www.myspace.com/megsonmusic) and have a listen to a sample of songs from all three albums. They are a little bit Kate Rusby which is no bad thing of course - 'Follow it On' sounds musically like the Lilac Time to these ears (not vocally - Debbie sings that one). The new album sounds rather more traditional and not unlike something Seth Lakeman might put together - they supported him on tour recently. See them.