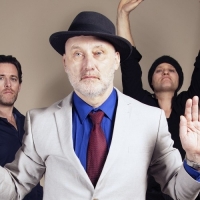 Eastender Jah Wobble could never be accused of resting on his laurels, or his Aris (as he might say). His musical output has been anything but staid and boring, in fact he has looked to other horizons and cultures to hone his craft, as well as still playing that incredibly unique bass with other luminaries such as Brian Eno, Holger Czukay, The Edge, Sinead O'Connor and now the Nippon Dub Ensemble. You may cock an eyebrow at that last name so let me explain.

Wobble married a Chinese musician in 2008 and since then has embraced the art of zen, both Chinese and Japanese, as well as generally leaving the bad old days behind. Now he is set to reveal just what he has been up to with a new album on his own 30 Hertz label (released on 6th April) and a few dates to support it. Traditional Japanese roots music mixed with tough electro-dub beats and bendy bass? Done!

The man begins with Sheffield on Monday 26th July continuing to Newcastle, Birmingham, Islington, Oxford and finally Liverpool on 5th August. Don't think for one minute that you have ages to buy tickets - you haven't! These will fly out, especially the London one and at £15 (£12 regionally) they are a bargain to see a true legend in bass-wielding action. Tickets go on sale on this Monday (22nd March) at 9am.