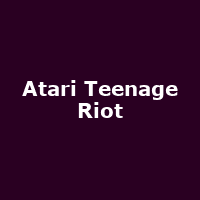 Fans of Alec Empire will be delighted to know that he has reformed his previous landmark techno-band, Atari Teenage Riot, for one more special gig at London's Electric Ballroom. Yep, you heard right and the date to remember is Wednesday 12th May with tickets on sale now at Â£20.80 (includes fee).

You might not (yet) be familiar with ATR but the German electro-trash rockers were such a 'live' force between 1992 and 2000 - at their final gig in Australia (Big Day Out festival), their audience included a besotted assortment of Joe Strummer, Nine Inch Nails, Red Hot Chilis and Primal Scream members. Their landmark album '60 Second Wipeout' (1999) was an uncompromising mix of political sloganeering and tough beats from the bowels of Satan. Add in the fact that you had a mixed-race and mixed-gender line up and, well, the music press were ultimately divided. Fans weren't - they lapped it up.

Regrettably, band member Carl Crack passed away in 2001 but they have enlisted the talents of one CX Kidtronik to provide that one more unforgettable gig. If you want to hear a remix of a recent tune, check out "Builder Remix" link (in the sidebar, to the right) for a spot of Soundcloud speaker-tweeking dubstep madness. BOOOM!