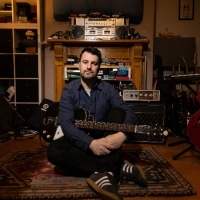 Everybody likes something for nothing but nothing always costs something, right? Yes of course it is. But how about when that nothing actually means having to pay for something you actually like? Now that's more like it.

You might remember the recent fad of weekend papers boosting their flagging sales by giving away a free album on the front - "20 Greatest Love Songs" (by Various Dead People). More recently we have seen the Daily Fail give away 'Tubular Bells' by Mike Oldfield and a 'greatest hits' from Pet Shop Boys. But you had to buy the rag with it.

The next step up though was 'Princegate' - the purple one opting to slip his latest aural delight in between the gardening mag and the umpteenth Oxfam pamphlet in the same paper, before the official release date.

Jim Moray, the BBC Folk Awards-winner English folk singer-songwriter, appears to have got the bug - his new album 'In Modern History' is to be given away with the folk and roots magazine 'Songlines' (the June Issue) [which will come out in May, as is the wacky world of publishing, folks - Ed]. Commercial suicide? Not so says Moray:

When you're a few albums in, it's very hard for people to form a different impression of you. So I wanted to do something interesting and something that's exciting in itself to create an opportunity for people to have the CD in their hand and give it a try. Perhaps having discovered the new album for free they might decide to come to a live show or want to investigate what I've done before.

If you want to investigate further, Jim Moray is also playing a few dates in London (25th Apr - Lexington), Coventry (21st May - Taylor John's) and Cambridge (21st Sep - Junction). Be sure to catch him, although his tickets aren't free (around £12 in fact).