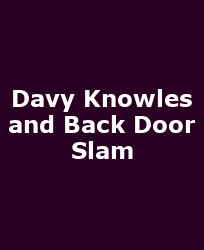 Davy Knowles and Back Door Slam

Britain's most enigmatic roots guitarist since the heyday of the Yardbirds, 22-year-old Isle Of Man-born Davy Knowles returns to the UK this April with his band Back Door Slam and his brand new album "Coming Up For Air", which was released in November last year by Blixstreet Records [check the sidebar for our review - Ed].

Davy Knowles will be playing four dates across the UK taking in Glasgow, Manchester, Birmingham and London in support of 'Coming Up For Air'. The album has received much critical acclaim in the UK over the last couple of months including articles in The Sunday Times Culture, Classic Rock and appearances on BBC Breakfast TV , BBC London and Kerrang radio.

Davy's last gig in the UK in February this year was to a packed and eager 100 Club that saw Davy perform a truly masterful and mesmerizing set. The Isle of Man native is proving that blues/rock guitar could very well be the next big thing with a style that unites young and old blues followers. The ever-expanding army of Davy Knowles fans will surely agree! You can catch him at one of the dates, below.

Tickets are on sale now, all of them giving you change from a tenner, including fees!