Ten Pound Tickets for Pratchett's Nation? They're Your Bargains Not Terry's - Until 25th March 2010 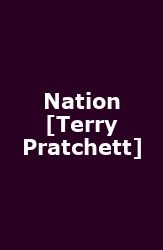 Fantasy writer Terry Pratchett, sorry, SIR Terry Pratchett is famous for his long-running 'Discworld' novel series, as well as other more adult science-fiction such as 'The Dark Side Of The Sun' and 'Strata'. In 2008 he released a new children's work entitled 'Nation', a novel that Pratchett 'had to write so much, he could taste it'. Since its publication, the Royal National Theatre has created a stage production that has enthralled a few sizeable audiences since its debut in 2009.

'Nation' is set in the late 19th century and concerns two teenagers thrown together on a deserted island by a tsunami. Neither understands the other, except the need to survive and build a new nation against the odds. It's action-packed and never a dull moment.

You now have the chance to see the family adventure for just Â£10, subject to availability and dependant on which date you go. The special evenings are in March on Tuesday 16th, Tuesday 23rd, Weds 24th and Thursday 25th - don't forget to key in 'TMDEAL' in the promotion code box prior to buying your tickets in order to get the Â£10 loveliness!