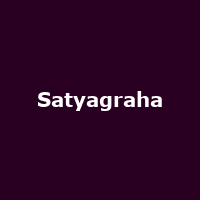 Fancy a quality contemporary opera for a tenner? (See what I did there?). The English National Opera version of the celebrated Philip Glass work, Satyagraha, is currently playing at the London Coliseum and tickets are normally around Â£25. For just 3 special nights only, you can see this production for just Â£10. Ten of your best sterling, if you please.

Glass's opera is loosely based on the life and times of Mahatma Ghandi during his time in South Africa. It follows his efforts in promoting non-violent protest and is in three acts. Not as intense as the other 2 operas in the composer's trilogy of works celebrating the lives of people who changed the world ('Einstein On The Beach' and 'Akhnaten'), this is an involving epic that wowed the crowds in New York and has sold out many performances in London since its debut in 2007. And you can't go wrong with ENO.