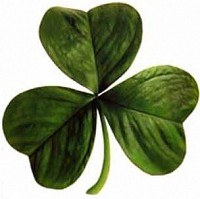 The celebration of the patron saint of Ireland will, once again, probably take an entire week either side of March 17th this year - no change there then. Naturally we don't condone getting hammered for the sheer sake of it (cough), but we do condone 'joining in with the spirit of things' and you can be sure that there are a few parties, parades and lock-ins worth attending, for cultural purposes of course.

The main event in London is the organized St Patrick's Day based in and around Trafalgar Square on Sunday 14th March. Like I said, the feast does tend to extend either side on occasions - couldn't very well shut the busy square on a Wednesday could they? The official Lord Mayor's Parade will begin in Piccadilly and pass through Trafalgar Square which will also be the main focal point for the Music Festival main stage performances, due to start at 11:30am with the winner of the Hot Press / Visit London shortlist competition kicking things off. The winners have just been announced today - Bipolar Empire will perform their version of sparky Irish rock including tracks from their new album (due later this spring). Other performers include folk-rock legend John Spillane (13:30), Irish alt-rock-stars Mundy (15:00) and the traditional Irish line-up from Kila (17:15). Cracking.

Manchester has two distinctly trad Patrick's gigs up for grabs - Irish-country legend Brendan Shine appears at the Palace Hotel on the 13th for Â£50 (this includes a full 4-course dinner) and the equally-respected Fureys and Davey Arthur on the 16th at the Palace Theatre (Â£22). St Patrick's Day itself sees the Frog and Bucket Comedy Club holding a special hilarious shindig for Â£6.

Back to the capital and the Brixton Windmill is the place to be on the 17th with their eclectic night of salsa, punk, blues, soul and rockabilly from four acts - plus the chance of some trad entertainment later into the night. Â£4.50 is a bargain. The Irish celtic-rock band, The Bible Code Sundays will also be getting rowdy at the Shepherd's Bush Empire on the same night for Â£12. Definitely worth seeing.

Finally, Liverpool's Irish connections will be celebrated at the city's Nation venue for a night of St Patrick's 'Medication', a student party par excellence. Â£5 will get you an Early Bird entry.

Whatever you get up to - drink responsibly (always hold your glass firmly).