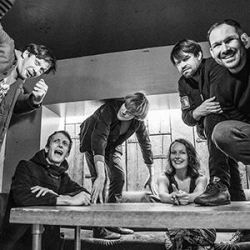 It's been a few years since British Sea Power bothered our ear-drums with a 'proper' (whatever that is) studio album - the last being 'Do You Like Rock Music?' recorded in 2007 (eventually released in early 2008). Last year they ventured away from the traditions of rock to record a new interpretation of the 30s cult-folk documentary, 'Man of Aran' - I loved it, personally.

Now the bird-spotting and country-loving guitar band is back with a new album due later in the spring and they have announced a few gigs to get the ball rolling with the old promo process.

Their first date is with the Hinterland Festival in Glasgow on April 3rd - it's a two-day festival costing £15 for a day ticket covering several venues and even more acts, including Friendly Fires and Hot Club De Paris. But BSP's headline dates kick off in Manchester on April 23rd and continue to Colchester (April 25th), Leeds (May 3rd) and Liverpool (May 19th). Tickets for their own gigs vary in prices - the Manchester one is a stonking £7 (plus fee).

The band have hinted at some special guests at their own dates but seem to be keeping that info under their fleecey hats.