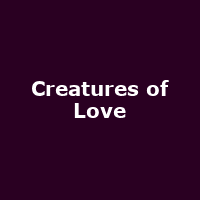 Sometimes, as the old hick (and The Magic Numbers) saying goes, 'them thar's the breaks' and that can certainly be true of electro dream-popfolk duo (and sometimes, trio), Creatures of Love. Not heard of them? If yes then you will have admired their operatic, pulsating and feedback-washed performances in and around Camden and King's Cross, as well as salivating at the thought of a headlining date at the Bull and Gate (Kentish Town) on March 6th (Saturday) and the Dublin Castle (Camden) on April 14th. If no, put down that sandwich for a minute and read on.

You may also have picked up their new iTunes-vendored EP, nattily entitled 'Creatures Of Love' (also due on CD at some point) and spied a familiar name in amongst the writing credits, one Chris Willsher. He also goes under the name Temper Temper who we covered and reviewed last year. That project has been put on hold because this one, with vocalist Bonita McKinney, seems to have gained momentum of late with the announcement of a debut UK tour during late spring and a festival appearance in the summer.

The initial magnificent seven May gigs begin in Peterborough (The Solstice - 6th) then Eastbourne (Blue Bar - 7th), Brighton (Prince Albert - 8th), Southampton (Hamptons - 9th), Swindon (The Vic - 11th), Stoke (Brown Jug - 12th) and finally Manchester's Night and Day venue on the 13th. The duo (trio) will then return to their hometown for a special date at the Hoxton Underbelly on May 20th, a gig that is sure to have a few nosey PR scouts having a poke about. Tickets for the dates vary but mostly a tenner or less.

In addition to their tour, the duo (trio) will also cut their festival teeth in June at the Willowman Festival in Northallerton in North Yorkshire. The three-day event takes place during Summer Solstice weekend from 18th to 20th with CoL appearing on the 19th. Dreadzone, The Beat, Eat Static, Martin Stephenson and the Daintees and The Blockheads have been confirmed for the festival as well (we'll give you more details on this one when we get them).