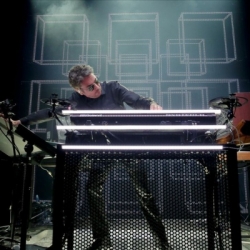 Aficionados read on and get ready in the (booking) starting blocs as the French godfather of ambient electronica will return to the UK this autumn! After visiting us last May '09 (whether this will turn into a yearly ritual, only he knows), the pioneering master has just announced three arena shows in October, which will see him conquer the Birmingham National Indoor Arena, the Manchester Evening News Arena and the O2 Arena in London , respectively on the 8th, the 9th and the 10th October.

"Acclaimed" is an understatement when it comes to describing this uber-accomplished musician, who in a four-decade-long time span has delivered some grandiose numbers in 'Oxygene' , 'Equinoxe', 'Rendezvous', 'Zoolook', 'Revolutions' or more recently 'Téo & Téa', off the eponymous studio album, released in 2007- his last to date. Among numerous accolades, Jarre was commissioned to compose the France 1998 FIFA World Cup theme and has had an asteroid, 4422 Jarre, named after him!

If that's enough to tease any potential new fan's attention, tickets for his notoriously mind-blowing shows go on sale this morning (Wednesday 3rd March) at 9am. Get 'em while you can.