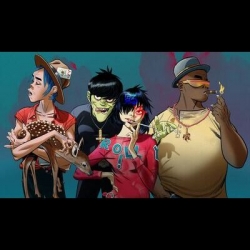 The hype-machine is in full-swing for the new Gorillaz album, 'Plastic Beach' out on March 8th. Remixes for the track 'Stylo' have just been uploaded onto You Tube this week as well as the accompanying video featuring Mr Die-Hard himself, Bruce Willis. You can watch a snippet to the right, or the full thing by clicking the Stylo - Video link in the sidebar. The video features our CGI-heroes hot-footing it across the US desert with a stereotypical fat donut-munching copper in tow (guess what happens to his police-car later on) and finally a bit of bumper-kissing between gun-toting Willis and the tricky threesome. The song is a cracker and features Mos Def and Bobby Womack on skits and vocals. It IS rather juicy.

Just to give you all a little teaser, check www.youtube.com/user/gorillaz for a number of idents for the new album, featuring some rather beautiful animation with music that evokes a little bit of James Bond themes in a Waterworld landscape. There is also an official 'Big Fog' teaser and even a 'Plastic Beach' adventure game (which is basic but strangely addictive).

Other collaborators on 'Plastic Beach' include Snoop Doggy Dogg, De La Soul, Lou Reed(!) and Mark E. Smith (!!!) from the Fall. And we haven't even mentioned the Clash have we? Oh yes, we just did. Looks like a good 'un from here.

Young Murdoc from Gorillaz will be spinning the plates (or DJ-ing if you like) and flashing the visuals at the upcoming Secret Garden Party 2010, due to start on July 22nd 'til 25th. What a talented little creature he is.